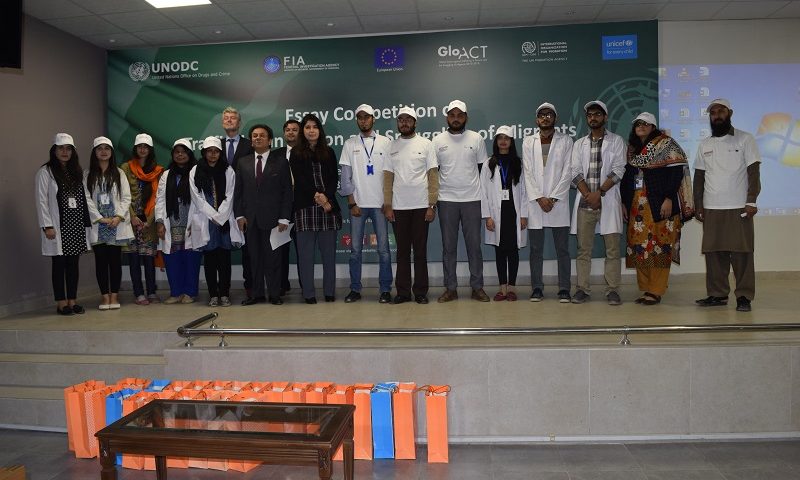 Essay Competition on Human Trafficking by UNODC and FIA at STMU

UNODC, under the framework of GLO.ACT (The Global Action against Trafficking in Persons and the Smuggling of Migrants), organized an essay competition at Shifa Tameer – e – Millat University Islamabad in collaboration with the Federal Investigation Agency. The event was attended by 200 young students from different departments within the university along with senior management of the university.

This event is part of awareness campaign that started its roll out in last quarter of 2018 under GLO.ACT Initiative. The campaign is being rolled out at the national level in which  500,000 leaflets have been distributed, 1200 banners have been displayed in key districts, a social media page was launched which has an outreach of more than 1.4 million people, public service messages on radio were aired and 500,000 mobile Short Messages (SMS) were sent to public in high risk areas to curb trafficking in persons and smuggling of migrants. 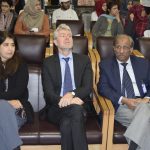 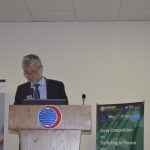 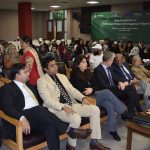 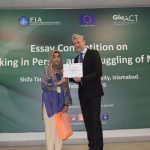 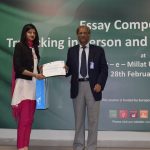 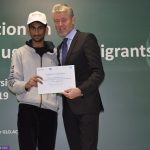 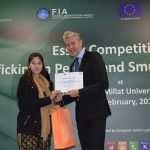 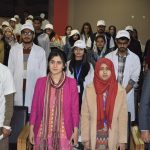 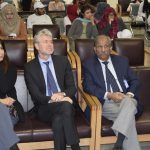 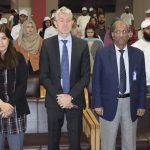 The aim of the campaign is to increase awareness on the risks, issues and challenges in Trafficking in Persons and Smuggling of Migrants, to create community-led efforts as well as a national discourse on the topic and ultimately engage policy makers.

Additional Director Immigration of the Federal Investigation Agency, Mr. Mukhtar Adeel in his remarks said “UNODC and the Federal Investigation Agency think that engaging youth in this discussion is very important if we want to change ourselves. It is people like you who will build this country and will take it forward to future in a sustainable manner”.

Law Enforcement Expert UNODC, Mr. Erwin Versteeg said that “This competition is to engage young people and involve them in the discussion, on human trafficking and migrant smuggling. UNODC and Federal Investigation Agency think that engaging youth in this discussion because young people like you, who will build this country and hopefully make a change for future”.

Dr. Manzoor H. Qazi, Chancellor, Shifa Tameer – e – Millat University said “by raising the awareness level of youth we can ensure that instances of abuse and exploitation are reported to relevant authorities and assistance is extended to vulnerable people. Our students are committed and stand united with the government of Pakistan and the United Nations Office on Drugs and Crime.”Dr. Mohammad Iqbal Khan, Vice Chancellor, Shifa Tameer – E – Millat University affirmed his commitment to the Government of Pakistan and said, ” We should all hold our hands for the cause and play important roles, that we have, to raise the awareness level of public.”